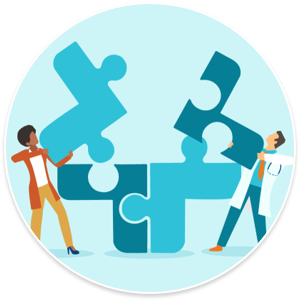 Growing numbers of community-based organizations (CBOs), such as Area Agencies on Aging (AAAs), are contracting with health care entities including managed care organizations and health care delivery organizations — to provide care coordination, evidence-based programming, nutrition, and other services for older adults in their communities. In counties where AAAs have more partnerships, older adults have been shown to have lower hospital readmission rates. Additionally, certain types of AAA-health care partnerships have the potential to reduce Medicare spending and nursing home use. Contracting with health care entities offers an avenue for AAAs to achieve sustainable funding to innovate, and support and expand their work in providing services that improve health and quality of life. Although such contracts are becoming more common, little evidence is available to help CBOs, health care entities, and policymakers develop an understanding of the internal organizational capabilities and external environmental factors that foster effective partnerships.

In recently published findings, researchers from the Yale School of Public Health, the University of California Berkeley School of Public Health, Scripps Gerontology Center of Excellence at Miami University, and USAging examined what factors were associated with AAAs that have contracts with health care entities. At the state level, the authors examined whether the states in which the AAAs were located had implemented delivery system reform, such as Medicaid 1115 delivery system reform waivers, health home programs, or Medicaid patient-centered medical homes, and whether the state had implemented managed long-term services and supports (MLTSS). The researchers also examined how the presence of CBO networks — coordinated groups of CBOs that pursue a regional or statewide contract with a health care entity — affects contracting with health care entities in the AAAs’ states.

At the organizational level, the authors looked at AAA proficiency in business acumen while controlling for organizational structure, budget, and area served. To assess the role of business acumen, the researchers used a 13-item business capabilities scale based on survey data, with elements such as developing value propositions and conducting market analyses. The research team also examined data on the sociodemographic characteristics of older adults and health care providers present in the areas that the AAAs serve.

Different factors were associated with the likelihood of a AAA having a contract with a health care insurer, such as a Medicaid managed care plan or Medicare Advantage plan, compared with a health care delivery organization, such as a hospital or health system. In addition, the findings indicate that both internal (i.e., organizational) and external (i.e., environmental) factors affect the likelihood of AAA contracting.

AAAs scoring highly on the business capabilities scale were significantly more likely to contract with an insurer. Specifically, AAAs scoring in the highest quartile on business capabilities were six times more likely to have a contract with a health care insurer than those in the bottom quartile. Scoring in the top quartile of business capabilities meant that AAAs reported completing or making progress on about six or more activities such as market analysis, business planning, rate setting, and marketing. These skills help AAAs identify appropriate partners and select the highest-value services to bring to contracts. Pursuing strategies such as organizational culture change and development of IT infrastructure also make AAAs more attractive as partners.

State characteristics also impact contracting. AAAs were more likely to contract with a health insurer when located in states where at least some AAAs contract through a formal AAA or CBO-led network, compared with AAAs without these networks. This suggests that availability of formal CBO networks facilitates AAA contracting, or that state-level policy environments that are conducive to the formation of CBO networks also support contracting efforts. For example, some states encourage the development of AAA or CBO contracting networks to: (1) ensure service availability across a wider geographic region than a contract with a single AAA would allow; and (2) simplify contracting by allowing health care partners to contract with only one entity rather than many CBOs. A CBO network may simplify the contracting process for CBOs as well.

AAAs located in states that had implemented more integrated delivery system policies were significantly more likely to have contracts with health care delivery organizations, such as a hospital or accountable care organization (ACO). The odds of contracting with a delivery organization were also significantly lower for AAAs in states that had implemented MLTSS, compared to states that had not. This may be because in states with MLTSS, AAAs contract directly with plans rather than with providers. While there was not a statistically significant relationship between state implementation of MLTSS and likelihood of contracting with health plans in this study, research from USAging’s Aging and Disability Business Institute found that Medicaid managed care plans are consistently the most common contracting partners among CBOs, including AAAs.

The presence of multiple delivery system reforms in a state, such as health home programs or patient-centered medical homes, appear to encourage contracts between health care delivery organizations and AAAs. State adoption of these reforms may create an environment that facilitates contracting between organizations such as hospitals and health systems and AAAs, since these reforms often promote payment for quality and better integration of acute care and social services. Some states explicitly encourage partnerships with CBOs. For example, the Medicaid ACO Program in Massachusetts, authorized by a Section 1115 waiver, created certified Community Partners, state-designated and certified CBOs or networks that work with ACOs to provide care management, care coordination, and other services to ACO members. AgeSpan (formerly Elder Services of the Merrimack Valley and North Shore), a AAA in northeastern Massachusetts, currently contracts with My Care, a Medicaid ACO, as a Community Partner. The success of this partnership led the ACO to expand the contract to include housing and nutrition services.

As research indicates that AAA-health care partnerships reduce nursing home utilization and Medicare spending, fostering these contracts is one way to work toward the Triple Aim of high-value health care: improving patient experience, improving population health, and lowering health care costs. This research sheds new light on ways to facilitate contracting between CBOs such as AAAs and health care partners, and what business skills and policy environments are most relevant to foster these relationships. While the findings indicate that state-level policy initiatives can broadly promote contracting, they also show that factors such as network development and business acumen matter, particularly for health plan partnerships.

Additional research from the same research team has shown that AAAs with a high number of health care partners shared distinctive features of organizational culture. These AAAs are focused on the potential needs of partners, recognize opportunities in their environments, can innovate to take advantage of these opportunities, and are willing to take calculated risks to pursue their goals. CBOs such as AAAs could strengthen internal capacity through training and resources such as those available through the Aging and Disability Business Institute.

CBOs, including AAAs, can use these findings to make decisions about which types of health care entities to partner with, which strategies would be most useful in approaching them, and which business skills to develop in order to be more effective business partners. These findings also provide guidance in developing initiatives to encourage CBO-health care contracting. States can encourage or require health plans or other health care delivery organizations to contract with CBOs, including AAAs, as they implement Medicaid MLTSS or other delivery system reform initiatives such as the Medicaid ACOs. Finally, this research indicates that policymakers and others developing initiatives should consider multi-pronged strategies to encourage contracting between both insurers and delivery organizations, such as combining investment in AAA business acumen and network development with state-level policy changes.